YES Does it all! 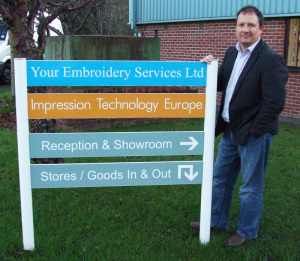 2015 marks the 20th anniversary of Your Embroidery Services Ltd (YES Ltd) so what better time to look back at how they have helped, supported and developed the garment decoration industry over the past two decades.

As the name suggests, the company was started to support the embroidery industry. From initially supplying used machines the directors at YES Ltd knew from experience that the industry, then ruled by a few large manufacturers, needed to change with a wider selection of new machines. Although a new company the depth of their experience was immense and it was not difficult to court new suppliers keen to harness that expertise. In 1997 the partnership with SWF was formed and the UK and Ireland market had another quality machine to choose from. Since then the two companies have developed unique products such as the SWF Dual Function and SWF high speed DM range which have allowed the industry to expand into different areas thereby augmenting the income stream to their customers. The company did not just concentrate on machines though. They wanted to be seen as a one-stop-shop for embroiderers and so developed partnerships with new software houses such as WINgs systems and consumable suppliers such as Robison Anton and more recently Fufu’s thread thus breaking the cartel-like hold exercised by some of the then suppliers.

Always on the lookout for new technology that would benefit their clients,  it was approximately 9 years later that the possibilities of direct to garment printing were introduced to the market and YES Ltd were quick to grasp the opportunity.  A year later the brand DTG Digital entered the UK market with a range of machines that was unique in this blossoming industry. Apart from servicing this new market YES Ltd was quick to spot the potential for embroiderers many of whom, by this time, were servicing the small order market.  Also in 2004 “Impression Technology Europe” was initiated to distribute, develop and design the DTG Digital brand further and, over the years, the two companies together with Impression Technology “Australia” have been responsible for a number of groundbreaking innovations making the industry more productive and profitable.

Whatever project they were working on though, the quality of the product was not the only consideration. The service and support had to be at least equal to, if not better than, the product itself.  From the very start service has been the watchword of the company as indeed it still is today.

Twenty years on YES Ltd has achieved a lot but, according to Sales Director John-Paul Burton, there is a lot more to come. Watch this space!! Are you looking for premium workwear and corporate clothing? Revealed! How to scale up your DTG business The latest in DTF printing from YES Group

Over the last 27 years YES Group, formally (Your Embroidery Services) has specialised in bringing …