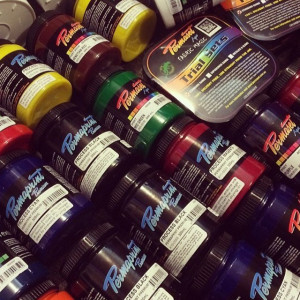 Silk screen printing has been around for centuries. Its earliest form dates back to ancient China, at the time of the Song Dynasty. The practice spread into Japan and other neighbouring countries over the years, and by the 18th century screen printing was adopted in Europe and gained public acceptance after silk mesh was brought in from the East.

Centuries later, the silk screen printing gained widespread momentum and is now used in a variety of industries. Perhaps the most notable is the clothing industry, where silk-screen printing is considered a primary method in creating unique T shirt prints.

Nowadays, there are two main types of textile inks commonly used by professional printers and each one carries a set of advantages and disadvantages. How do you know which one is best for your needs? Colormaker Industries, the team behind the Permaset range of inks, breaks down the pros and cons for you.

Plastisol inks are comprised of particles of PVC plastic dispersed in a plasticiser medium, and often contain no volatile components. All plastisols are thermoplastic, which means that they must be heated to cure. Typically, curing of a printed plastisol occurs quickly (</= 20 seconds) at temperatures over 160°C (320°F), resulting in the formation of a continuous film which sits on top of the fabric. Plastisol inks remain a popular choice for many professionals, as they allow for versatility in application and durability of finish, since textiles printed with plastisols retain vividness and colour.

Because the plastisol film sits on top of the fabric, films can be applied equally well to dark and light coloured fabrics without affecting the colour of the print. This property also means that plastisols can be applied over other ink – even wet-on-wet – without bleeding or affecting opacity. The other main benefit of plastisols can be attributed to the fact that they do not dry out in the screen. This means they can be left out or on screens for long periods without clogging the mesh or affecting their ability to print. Other benefits of plastisols include their durability, and their compatibility with most of the emulsions and/or adhesives used to fix screen stencils.

Plastisol films are more likely to result in harder hand-feel and also limit breathability of textiles, both of which are considered less desirable. Also, because of their higher build, older plastisols are more likely to chip or crack, and printing over high nap fabrics, or onto areas such as seams, creases, or contact areas on textiles can create problems because films have a tendency to clump, crack, or rub. Due to their thermoplastic nature, plastisols can also be affected by sources of high temperature such as irons and tumble dryers, which can cause films to become soft and smear.
A further disadvantage involves chemicals used in the manufacture and handling of plastisols and in printing with them and curing. Specifically, most plastisols still contain phthalate plasticisers which have been widely recognised as having harmful health and environmental effects. This is changing due to pressure from governments and environmental agencies in many countries. Some chemicals used to clean up plastisols are also considered hazardous, and consequently both plastisols and cleaning solvents may require specialised disposal. During curing, plastisols also give off Vinyl Chloride Monomer (VCM) fumes. These have also been widely recognised as having harmful health effects.

Water-based inks – as the name implies – are dispersions of pigment or dye in a water-based medium. These inks cure through the evaporation of volatile components as well as heat, and this means that only a portion of the ink remains after application. In contrast to plastisols, water-based inks are more likely to penetrate into textile fibres instead of forming a film on top. Newer technology polymers with enhanced adhesion reduce the need for penetration.
Water-based inks have gained momentum in the fabric printing industry, due to their soft hand-feel, environmental safety and ease of clean up and the ability to utilise new techniques and effects when printing.

The penetrative effect of water-based inks means that a print can be applied evenly over all areas on a variety of fabrics, including some notoriously difficult to print with plastisols such as towelling. This effect can also give water based prints a more washed out look which is ideal for vintage or faded designs. After evaporation, water-based inks films are a lot thinner than their plastisol counterparts, and this allows them much greater flexibility. This flexibility combined with their coverage and ease of use makes water based inks most desirable for roll to roll yardage printing.

In addition, lower film builds mean that water-based inks have a much softer hand-feel and better breathability which account for much greater comfort of wearable textiles. Water-based inks are also an eco-friendly choice, and are readily cleaned up in water. Some of these inks have been granted approval by the Soil Association in the UK, having successfully met the requirements of the Global Organic Textiles Standards (GOTS) for non-organic chemical inputs for use in organic textile processing.

Water-based inks are generally considered more challenging to use because they are more inclined to dry in the screen and they take longer to cure than plastisols due to their need to evaporate in addition to heating. In large scale operations, this extra step may require greater floor space for equipment such as evaporative driers.
While the penetrative effect of traditional water-based inks does have its benefits, it also means that the colour of the fabric can interfere with the colour of the ink, so that for darker fabrics in particular, prints may not appear as intended. In comparison to plastisols, traditional water-based colours do not appear as bold or vivid, or have as high opacity.

A minor consideration in printing with water based inks is that they will dissolve emulsions typically used for plastisol screen stencils. This is easily resolved by using water resistant or dual cure emulsions which are suitable for water-based printing.

Colormaker Industries offers a range of water-based textile printing inks, in the Permaset Aqua, Permatone, and Permaprint Premium ranges. Each of these products is guaranteed to have undergone high quality standard checks to ensure you have the best textile ink for your screen printing needs.