Dave Roper is the sole supplier of M&R textile screen printing equipment in the UK. Detailed below are three of the latest products available.

Stryker’s 10-station base module can be expanded in six-station increments up to 52 stations, and the press is capable of index speeds up to 900 pieces per hour. All but end stations can support printheads so Stryker can be tailored to almost any production requirement. Striker’s maximum standard image area is 60x84cm (24x33in), but it can print images up to 100x84cm (39x33in) in alternating print heads. Special standard features include the Maintenance Minder alert system, a Laser Locator System, the exclusive Squeegee Dam system, the Ink Dip ink retrieval system, and the squeegee/floodbar park feature. 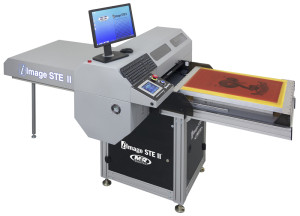 M&R’s i-Image STE is the world’s first all-in-one CTS imaging and UV LED exposure system (patents pending), and it was Pre-Press Product of the Year at SGIA 2014. CTS images are superior to traditional film positives, and LEDs run cooler, save energy costs, reduce screen exposure time, and speed up production. On the inward pass, i-Image STE quickly generates opaque images on screens. On the outward pass, the scanning UV LED light source exposes the emulsion, producing screens that can be taken directly to washout. i-Image STE II adds a secondary UV LED light source after the inward pass for ultra-fast exposures on dual-cure and other slower-exposing emulsions.