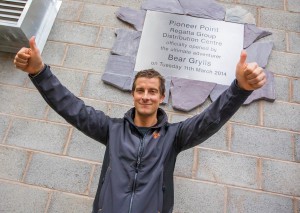 Bear Grylls, who has an official clothing line with Craghoppers, a Regatta Group company, attended a reception at Pioneer Point and met the 400-strong logistics team which distributes around 100,000 units per day to over 55 countries across the world. 40% of this workforce is made up of people from the Ellesmere Port area.

Keith Black, Chief Executive, Regatta Group said: “This is not just an excuse for a party, but recognition of all of the hard work put in by our logistics teams to provide exemplary customer service to all of our customers around the world.

“We are delighted to have created over 300 jobs in this area and have been very impressed with the individuals who have joined us. I’m sure Bear Grylls will be an inspiring visitor for all.”

Pioneer Point houses one of the highest manually-picked racking units in the whole of Europe, standing at an impressive 15.6 metres in the air.

Bear Grylls said: “Opening a distribution centre is a brand new adventure for me and I’m really looking forward to meeting all of the teams that keep the wheels in motion. I have worked with Regatta Group for seven years and I never cease to be impressed by their ambition and entrepreneurialism.” Bear Grylls and Keith Black unveiled a slate plaque to mark the occasion on Tuesday 11th March at Pioneer Point, Ellesmere Port.