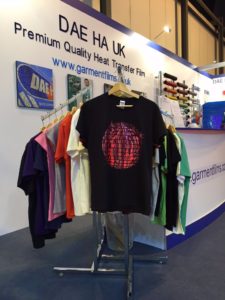 You might think that was enough products for one company to introduce in one year, but Dae Ha UK isn’t stopping there and is launching several new products in the not too distant future. The first will see an additional 35 colours added to the real Glitter film range. This brings the total number of colours in the range to an impressive 75.  As well as this, September will see the introduction of Dae Ha UK’s Printable (Digital) Glitter film for solvent/ eco-solvent print and cut machines. This product will initially only be available in the company’s rainbow white colour, but will become available later this year in white and all neon glitter colours too.

It’s this continuous product development, as well as a reputation for excellent customer service, which has allowed Dae Ha UK to experience rapid growth. Last year the company achieved more than 150% growth, a trend which has continued well into 2016. It’s not just the UK arm which is experiencing rapid growth; Dae Ha Korea has seen huge growth in the USA during the last 12 months.

Dae Ha UK supplies an average of two new customers a day, ranging from home start-ups to British fashion designers (and every type of customer in between).

From its distribution centre in Tring, Hertfordshire, Dae Ha UK is able to supply directly to all UK, Ireland and EMEA customers in the business of garment decoration and textile printing, thereby ensuring an unrivalled quality to price ratio.

All of the above makes Dae Ha UK confident that it will have a garment film available to suit your business.

Next year will see many exciting new things planned for Dae Ha UK, including the launch of a mobile-friendly website – so watch this space. SA International (SAi) has announced the launch of Flexi 22, a fully-updated and more powerful …