New products, new brands, new faces – 2016 was a year not to forget. So let’s take a look back at some of the highlights from the last 12 months.

In our bumper What’s New issue many new brands took the opportunity to announce their presence in the UK printwear market. This included schoolwear brand AWDis Academy and denim brand So Denim by AWDis. Other companies including Amaya Sales UK, B&C Collection, SF (Skinnifit) and Uneek Clothing all unveiled their new products for the year ahead.

Obviously the annual highlight for the P&P team is Printwear & Promotion LIVE!, which this year took place from Sunday, February 28 to Tuesday, March 1 at the NEC in Birmingham. Over 20 new exhibitors snapped up the chance to showcase their products in front of thousands of visitors. P&P LIVE! 2017 is shaping up to the biggest yet as the show moves into the larger Hall 20 at the NEC.

This month we reported that many people took up new positions within the printwear industry. Laura Thomas joined the board at Blue Max Banner as group sales and marketing director, Rob Smith was appointed director of Wilcom Europe, Eyal Manzoor became the new managing director of Kornit Digital Europe and Incorporatewear made two appointments in the form of Dawn Fox-Banks and Claire Shaw.

March was also the month that P&P launched its new Decorator Profile. P&P editor Melanie Attlesey spoke to Adam Allen about his company RetroClassic Clothing. Over the year we featured many more innovative and exciting garment decorators with many more stories planned for 2017.

This issue featured our full-to-the-brim review of P&P LIVE! 2016. Exhibitors raved about the great time they had at the show, while visitors also commented on how much they enjoyed their visit. One visitor commented on how they thought the show is essential and beneficial to everyone in the printwear industry.

A change in season saw the release of further new products into the printwear market. This month P&P editor Melanie Attlesey caught up with Jim Nicol at TheMagicTouch to talk about the company’s latest innovative product – T.One, a single-step transfer paper.

And earlier in year PenCarrie celebrated its 25th anniversary. The team spoke about the last 25 years at length in a special feature in this issue.

Voters across the UK took to the polls on June 23 to decide whether they wanted Britain to remain part of the European Union or to leave. More than 17m voted to leave , while 16.1m voted to remain. P&P editor Melanie Attlesey asked the industry for their thoughts on the situation, with the overwhelming response suggesting that the printwear industry would be better off if Britain remained in the EU.

We also reported in this issue that Steve Worthy, Leicester resident and account manager at EverythingBranded.co.uk, was lucky enough to hand Leicester City the Premier League trophy on May 7. He won a competition hosted by Barclays in support of his 97-year-old grandmother Gladys Kenney, who is a life-long supporter of the team. He said at the time that it was what dreams are made of.

As we entered the second half of 2016, new products were definitely still in abundance despite the usually quieter summer period. Roland DG released a fluorescent ink for use with its Texart XT-640 and RT-640 dye sublimation printers, eTrader launched a promotional products version of its popular web platform and Continental Clothing Co. launched a new Fair Share clothing line which promises a fairer wage for workers.

This month key players from within the printwear industry provided a mid-season product update in our Supplier Profile feature. Brands such as Gildan, Kids Wholesale Clothing and Kustom Kit all discussed their plans for the remainder of 2016. Also in this issue, machinery suppliers discussed what they believe the next five years has in store for the printwear industry. The overwhelming response was that short-run lengths and one-off personalisations would become the norm.

As the season changed from summer to autumn, jackets and fleece came into their own in this issue. Gary Layzell, brand ambassador at Result Clothing, provided some invaluable advice on how to decorate those tricky high-end pieces of outerwear, while other brands discussed their latest product offerings.

And the advice within this issue didn’t stop there. Stephen Ball, UV sales manager at YES Ltd, talked through step-by-step how to print on to a ceramic tile using the Compress iUV-600s, quite handy for those looking to get into a different aspect of promotional product decoration.

To provide readers with an even better online service, this month we unveiled the new Printwear & Promotion website. It is full to the brim with the latest news, product releases and features, plus some online exclusives.

Also within this issue we featured interviews with Wilflex about the launch of the company’s new community for screen printers and with the team at Devanét UK who provided a behind the scenes look at the business. We also previewed the Schoolwear Show 2016, which is a highlight in any schoolwear retailer or suppliers year.

And still the product innovation continued. Going head to head in the sportswear arena this month was SPIRO and Regatta Professional. November saw the launch of SPIRO’s new Impact Fitness Wear range, while Regatta Professional announced the release of its new Activewear brand. In this issue David and Sara Sanders-Smith of Result and SPIRO talked at length about the launch of their new brand, while Regatta provided just a glimpse of theirs.

Also within the November issue, the team at Grahame Gardner discussed the development of its Advance range of bespoke dye sublimation healthcare uniforms. This was designed to inject some life into traditional scrubs. 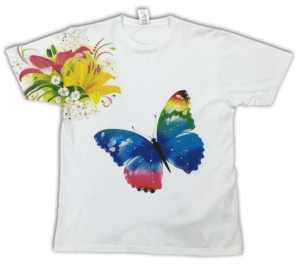 And here we are. The final month of 2016. We may have reached the end of the year, but that doesn’t mean the printwear industry has stopped moving and evolving.

Big news this month was the release of RTP Apparel’s range of T shirts that don’t need pre-treating – great news for DTG printers. Why not take a look through the full December issue to discover for yourself all that has happened as we near the end of 2016 and look ahead to 2017.