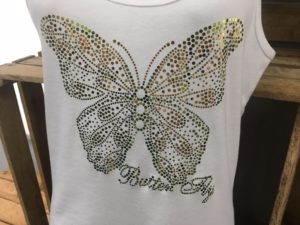 So, your customer wants a different style of decoration on the garment but they are not quite sure what would work. They want something that will give a lot of cover but won’t cost the earth. What can you offer them? John-Paul Burton, director of YES Ltd explains.

Only a few years ago the answer would have been sequins but these days there is so much more on offer and the two probable market leaders are rhinestones and spangles – but what is the difference?

Both of these transfers work very well in the bling game but they have very different attributes, especially where the ‘feel’ of the garment is concerned. Rhinestones tend to be three dimensional and so will stand proud of the garment whereas spangles are always flat. They may give a 3D effect but that is because they are holographic and only give the optical illusion of depth. This is a very important fact where spangles are concerned as the thinness not only gives a better handle to the garment, it also adds no excess weight making them ideal, for instance, for a neck design. The weight of the rhinestones in such a design would affect the way the garment drapes whereas the spangles would have no such effect. The thin weightless specification of spangles also makes them ideal for a wider range of applications such as dance costumes, cheer leader outfits, sportswear and children’s garments.

It will depend on what your customer wants though. They may prefer the three dimensional look and tactile feel of the rhinestone and this may be because of the fashionable nature of the garment. The point is that both you and your customer now have a choice.

It is cost though where you will see the biggest difference. Spangles have a much lower cost attached to them and yet achieve, in many cases, the same results as rhinestones. This gives you the option of meeting the price point demanded by the customer or, preferably, increasing your profit margin. Not only is the raw material more economical, machines such as the Spangle Elite operate four times faster than an equivalent rhinestone machine giving you increased productivity as well as profit.

Designs are easy to generate using the provided software which reads a .dst file so you can easily generate patterns from embroidery designs. You can also mix and match using both embroidery and spangles.

Both rhinestone and spangle application works well in the embroidery or print environment but spangle is the more cost effective to employ. The investment is lower and the raw material and production costs are also lower than with rhinestone. Adding in a wider range of applications spangle decoration is something that embroiderers and printers should definitely be looking at. How to drive growth with customisation Product sampling: Is this marketing strategy worth the investment?

In the eyes of a consumer, free samples are obviously worth it, but what about …