A promotion too far? 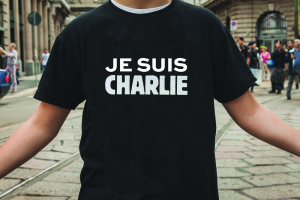 Controversial slogans and bold images have always featured on promotional T shirts, but in light of a recent tragic event which took place in Paris should printers be more circumspect in what they print? Or are they just responding to demand? P&P editor MELANIE ATTLESEY discusses.

The British public loves to buy T shirts, mugs and tea towels as a souvenir to remember important historical events. Take for example the highly anticipated Royal wedding of the Duke and Duchess of Cambridge in April 2011. Everything from cushions to stamps were sold in the public’s bid to remember the day. It was later estimated that sales of merchandising from the event reached £44m.

In January we witnessed the tragic shooting of eight members of staff connected to the French satirical magazine Charlie Hebdo, two police officers and two bystanders. The massacre followed publication of a cartoon depicting the Prophet Mohammed.

Since this event on January 7 the phrase ‘Je suis Charlie’ (which translates as I am Charlie) has become synonymous with free speech and freedom of expression, especially for the press. The hashtag #jesuischarlie on Twitter was one of the most popular in social media website’s history and was tweeted a staggering 6,500 times a minute as the tragedy unfolded.

But then followed the promotional products. Almost within a week of the event ‘Je suis Charlie’ T shirts with the slogan were cropping up all over websites such as eBay and Amazon, selling for as much as £10 a piece, with badges selling for as much as £1.99 and jute shopping bags selling for £9. Celebrities such as George Clooney and his wife Amal, even took to the red carpet at the Golden Globes wearing black and white badges emblazoned with the phrase. And more recently Hollywood actress Melanie Griffith was spotted wearing a ‘Je suis Charlie’ T shirt on the way to the gym.

A French website called Spreadshirt was criticised for selling such items under the assumption that it was profiting from the sale of the products. This led to the website commenting: “We have been very diligent in assuring that none of the ‘I am Charlie-related’ designs or products in our partner shops, marketplace or external marketplaces carries any commission that would in any way turn a profit from this tragedy. Furthermore, Spreadshirt will accept no commission on the sale of any ‘I am Charlie’ products.

“We are proud to join the worldwide solidarity movement to show our support for the newspaper by donating all profits of ‘Je suis Charlie’ or ‘Charlie Hebdo’ products to the official ‘Support Charlie Hebdo and the families of victims of the attack’ foundation.”

Charlie Hebdo itself even latched onto the way that promotional products were produced in the aftermath of the shooting. In the first magazine after the massacre a cartoon depicting some garment workers in Bangladesh sewing T shirts with the phrase ‘Je suis Charlie’ was published. Some commentators speculated that the cartoon, of which the caption reads ‘See what is happening in Bangladesh, on the other hand’, contained the message that the factories in Bangladesh are making good business out of the tragedy.

It’s not just the massacre in Paris that has seen such products appear for sale online. Almost immediately after the Boston Marathon bombing in April 2013, memorabilia appeared on eBay and it is possible to find products for sale connected to the Ebola crisis currently afflicting Western Africa. Even the Rana Plaza factory collapse in Bangladesh in April 2013, which devastated the garment manufacturing industry, didn’t escape the clutches of those in the T shirt printing market. A T shirt with the phrase ‘Never forget Rana Plaza incident’ can be bought online for £10.95.

The use of the phrase ‘Je suis Charlie’ was taken a step further after the event and has since been the subject of approximately 50 trademark claims in France alone. A Belgian businessman wanted to trademark the phrase for use on printed T shirts, toys, food and even Christmas presents. He is now understood to have withdrawn his application. Another company in Australia wanted to use the phrase on apparel including clothing, footwear and headgear. All 50 claims in France have been rejected.

Herein lays the issue. Should something as sensitive and tragic as the shooting in Paris be commercialised, remembered or profited from in such a way? There will always be the suspicion that such products are being profited from, rather than the money being donated to a charitable cause.

While it is easy to attribute blame to such companies who look to capitalise out of such events by selling promotional products, perhaps it is the consumer who is to blame? Is it just a clear case of market forces demanding such products? In today’s society people want to literally show their support for a cause on their sleeve and this is enhanced by the power of social media. Without the demand for these garments, the supply would quickly wane.

Of course it is not to say that there are printers out there on the internet who see such disasters as an easy way to make money. However, ultimately it is the buyer who decides what is right and what is wrong when it comes to garments relating to such tragic events. And, only time will tell whether the sale of ‘Je suis Charlie’ items is a flash in the pan concept set up by those looking to cash in on the shooting or a means of protesting against those who are opposed to freedom of speech.

The managing director of ethical clothing company Mantis World, PRAMA BHARDWAJ, answered a few questions on the subject of promotional merchandise being sold in this context.

Here are her responses:

Q. Would you be happy to know that printers are using your garments on the back of such an event? Or do you see it as a freedom of expression?

A. What better way to promote a cause than a slogan on a T shirt? From the anti-apartheid campaigns, to raising money for causes such as Band Aid or Cancer Research millions of T shirts have been used as a personal billboard for people to show what they care about. A slogan T shirt is one of the best examples of our right to freedom of expression. We may not always agree with the slogan on the shirt, but that’s the point of freedom of expression.

Q. Is selling such products in poor taste?

A. It’s more complicated than that. Depending on the event or cause, the organisers and sellers of these products have to be careful about the origin. Recently Whistles made headlines when they produced the ‘This is what a feminist looks like’ T shirt, sported by the likes of Ed Miliband and Harriet Harman for the Fawcett Society. The charity was under the impression they would be made in the UK, but they were made in a factory employing migrant (mostly female) workers in Mauritius.  This gave the Daily Mail ample ammunition to ensure the campaign was remembered for its ‘sweatshop’ production exploiting women rather than the feminist message being conveyed.

If the organiser is promoting a cause that has something to do with human rights or protection of the environment then they have a responsibility to ensure that passion carries through all its operations. What’s the point in talking about the human right of freedom of expression if your vehicle for marketing it (i.e. your T shirt) is made by people who don’t have the basic human right to work in safe and decent conditions?

Q. Is it ever right to profit out of such an event?

A. When people have a strong desire to have a visual representation of their beliefs in the form of a T shirt or mug, then they have the right to buy it. And the market will move to supply that demand, but it must do so with authenticity. Most people are happy to pay a fair price for a product if they believe it is made well, but people will feel cheated buying something that they then find out sits totally outside their values.

Q. Is this a new phenomenon in the printwear/promotional products industry?

A. No as I said before, it’s been happening for a long time. Back in the 80s slogan tees were at their height after Katharine Hamnett famously met Margaret Thatcher wearing her CND T shirt. Many of us were wearing anti-apartheid T shirts in the early 1990s – we felt proud to be associated with the movement and happy to have paid for the slogan T shirt.  Now we’re a bit more educated we can question how our slogan T shirt was made, and hopefully feel just a bit prouder.