20 years of service and sales with a smile 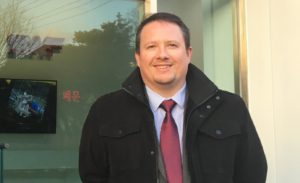 John-Paul Burton, sales director at Your Embroidery Services (YES Ltd) and sister company Impression Technology Europe, is celebrating his 20th anniversary this year within a dual organisation that has grown and thrived since inception.

John-Paul, known to most as JP, began his career at the tender age of 16. Starting out as a trainee sewing machine technician in 1990, he went on to fix Barudan embroidery machines at Geoffrey E MacPherson on Lenton Boulevard. John-Paul eventually moved into technical/sales with Salco Melco embroidery systems, but prior to them changing their business model he loyally jumped ship in 1998 when he was offered the role of sales technician at his father’s new company, YES Ltd. And he hasn’t looked back since.

As sales director for the UK and overseas, John-Paul is known for his cheerful persona and first-class technical service knowledge. Working alongside YES and ITE’s customers, partners and dealers has allowed him to fully grasp and value the plethora of brands and products that the dual company sells. Moreover, John-Paul’s wealth of expertise and experience has assisted in delivering products and services within the decoration industry that are second to none.

As sole distributor of SWF embroidery machines in the UK and Ireland and the DTG Digital Europe range of direct to garment printing machines, YES Ltd has built its foundations upon solid and reputable brands. Compress UV label systems and Compress UV printing machines were eventually added to the company’s portfolio, alongside the, Eclipse range of Label finishing machines, the new range of Ricoma embroidery machines, SpangleElite bling machines and last, but not least, the brand-new Print Wizard transfer printing system. The company’s passion for innovation continues to grow, alongside its dedication to serving its loyal customer base.

It’s clear to all who have dealt with John-Paul that he has a real passion for what he does. He works because he enjoys it, and not because he has to, which contributes to YES Ltd’s continuous growth and success.

The whole team at YES and ITE would like to wish John-Paul a happy 20th anniversary and many more to come. Since being founded in 2000, Mantis World has been a pioneer in the field of … Re-register now to continue your subscription of P&P

To ensure you continue to receive your printed and digital copy of Printwear & Promotion, …